Parodox: Poetry of connections and opposites

Sometimes the  juxtaposition of 'opposites' or looking at things from a different perspective can provide a new source of ideas and lead to new directions for your work.  I recently visited the house of a friend and was drawn to a set of glasses placed in a window which also looked out onto a garden. 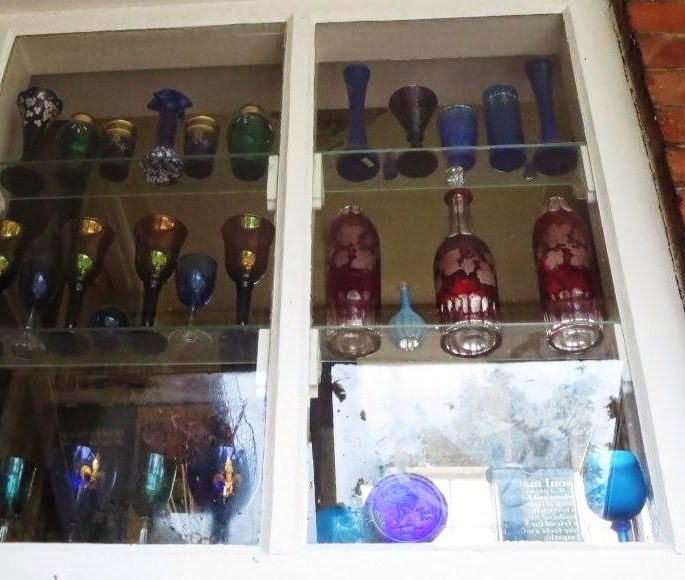 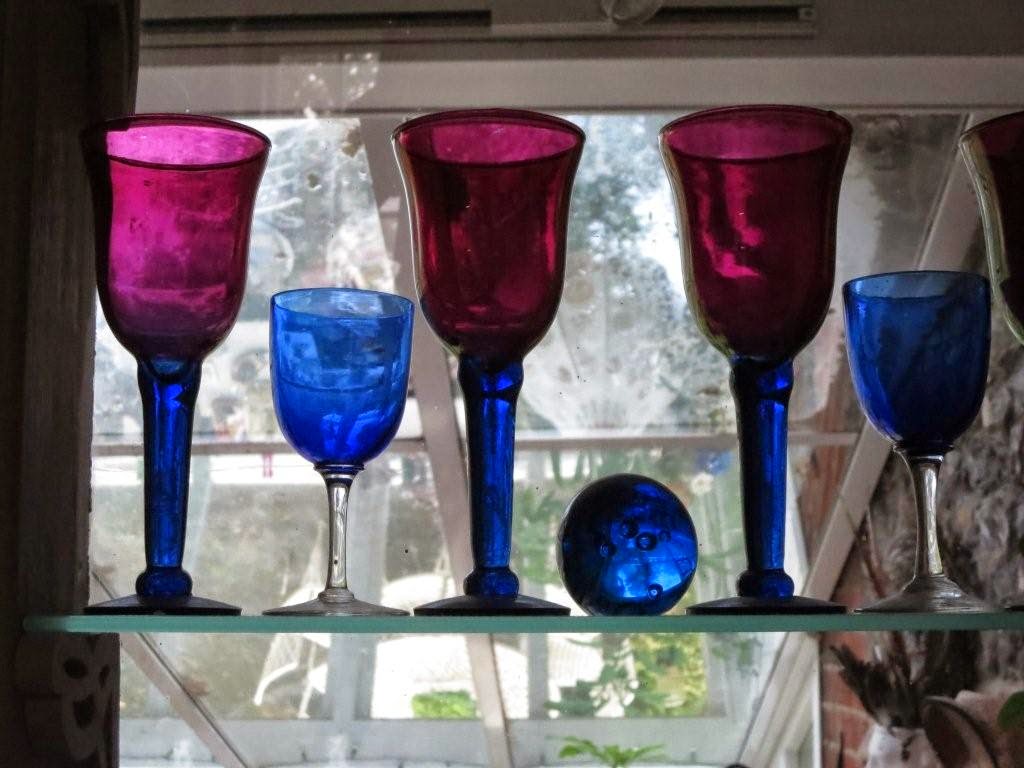 Similarly, I enjoyed sketching this collection of objects through a window of a greenhouse. 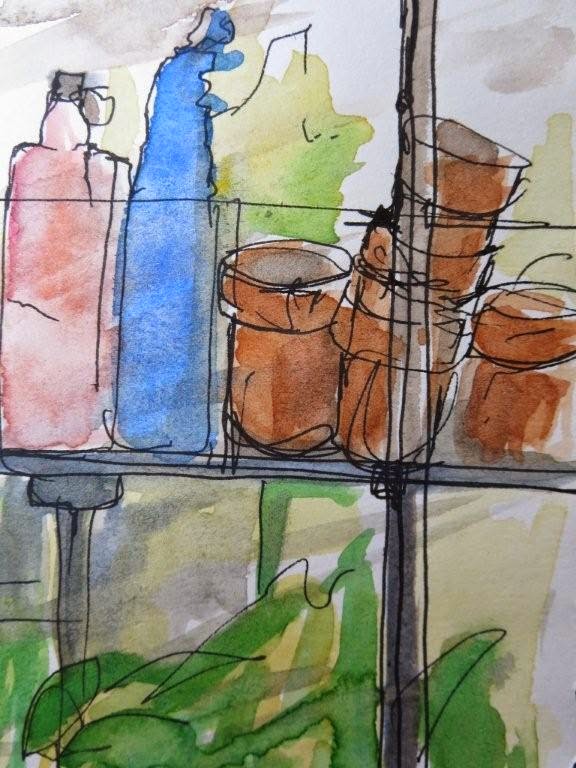 Similarly, these wonderful Indian panels are worthy of a backside look. 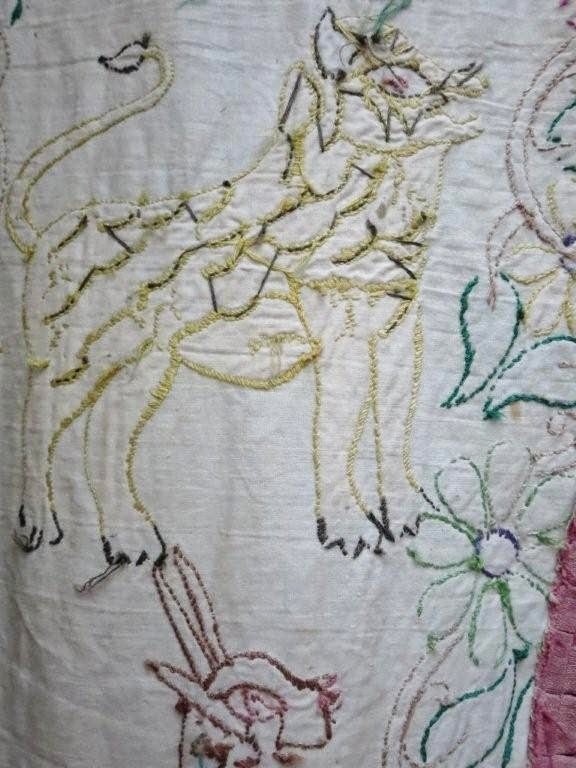 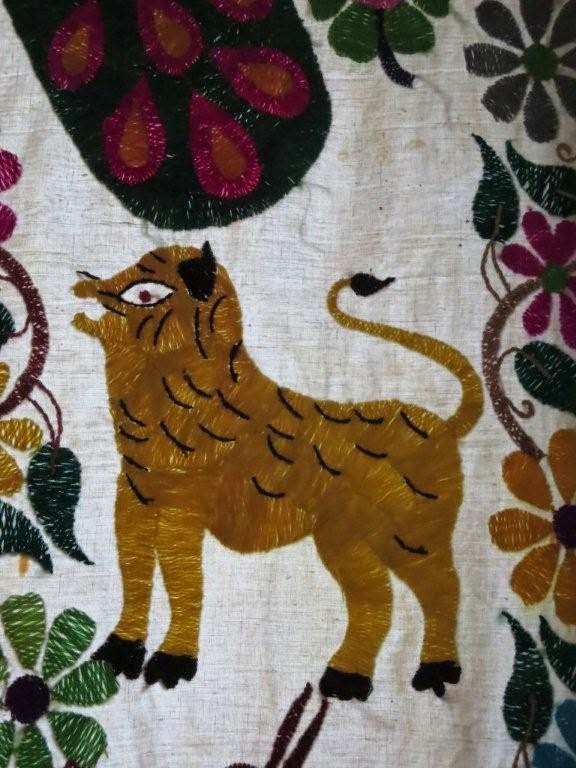 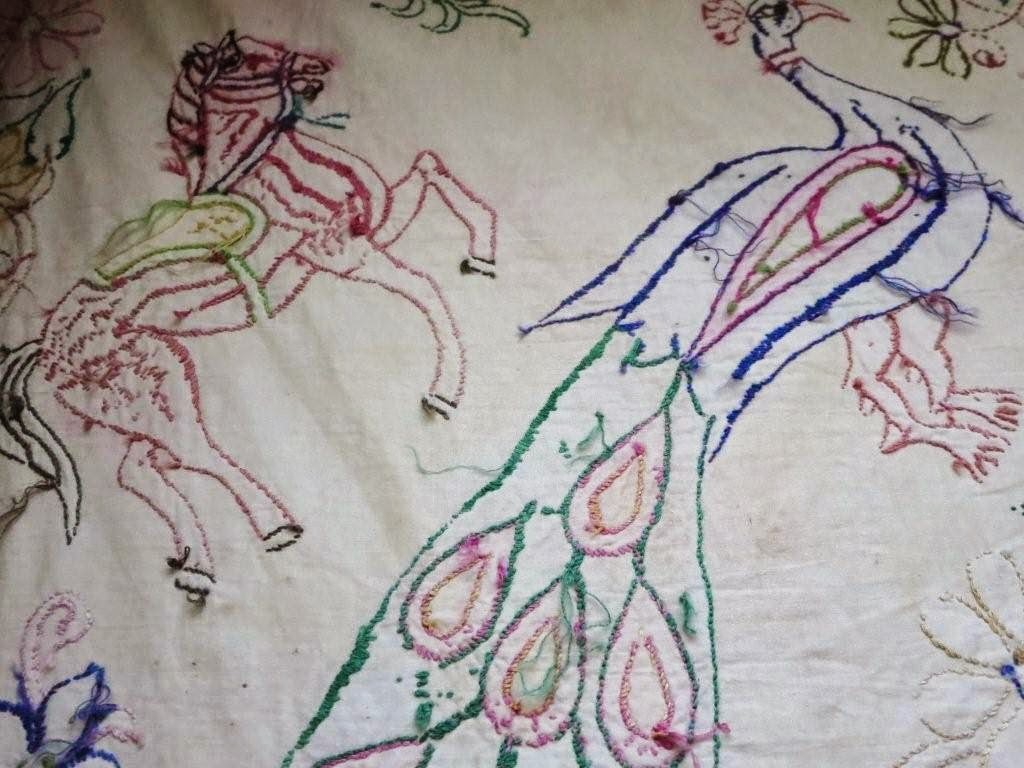 Bringing the outside in has been demonstrated in the wonderfully framing of one of my crows by the owners. He is placed in the trees and more relevant shares a space with Quintin Bell's characterful ceramics. Bell was also a writer and the biography of his famous aunt, Virginia Woolf: A Biography, 2 vols (London: Hogarth Press, 1972) 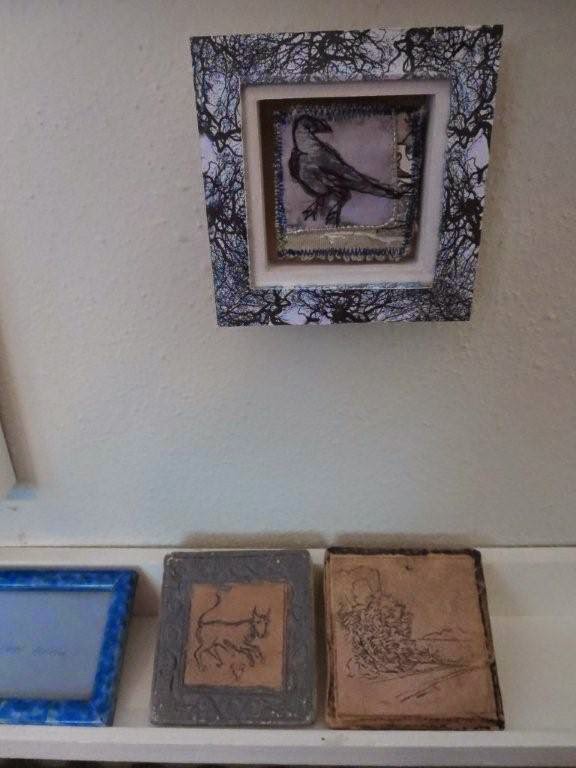 Above sits a striking  print by Ceri Richards showing a detail of a Crane (below sits my Dungeness stitch sketch). He was commissioned to illustrate the poem The force that through the green fuse (1933) by Dylan Thomas for Poetry London (xi/3, 1947) which  led to further paintings and lithographs related to Thomas's writings and to the work of other poets such as Vernon Watkins. Bringing together different forms of artwork and interesting juxtaposition of styles.  (wonderful to be in such exulted company) 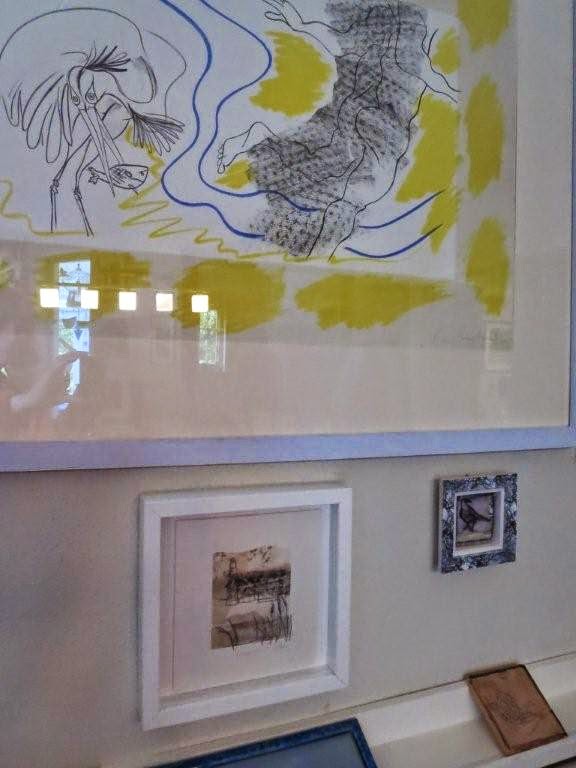 I trained in Fine Art as a painter  but use cloth as my medium, paradoxically things have gone full circle and II now 'paint with cloth'. Often these disciplines are seen as 'opposites' in the creative field....I prefer to see their connections . This detail of 'Crane', one in the series of 40 yards, uses the backside of a lace curtain and leaf print for the starting point. 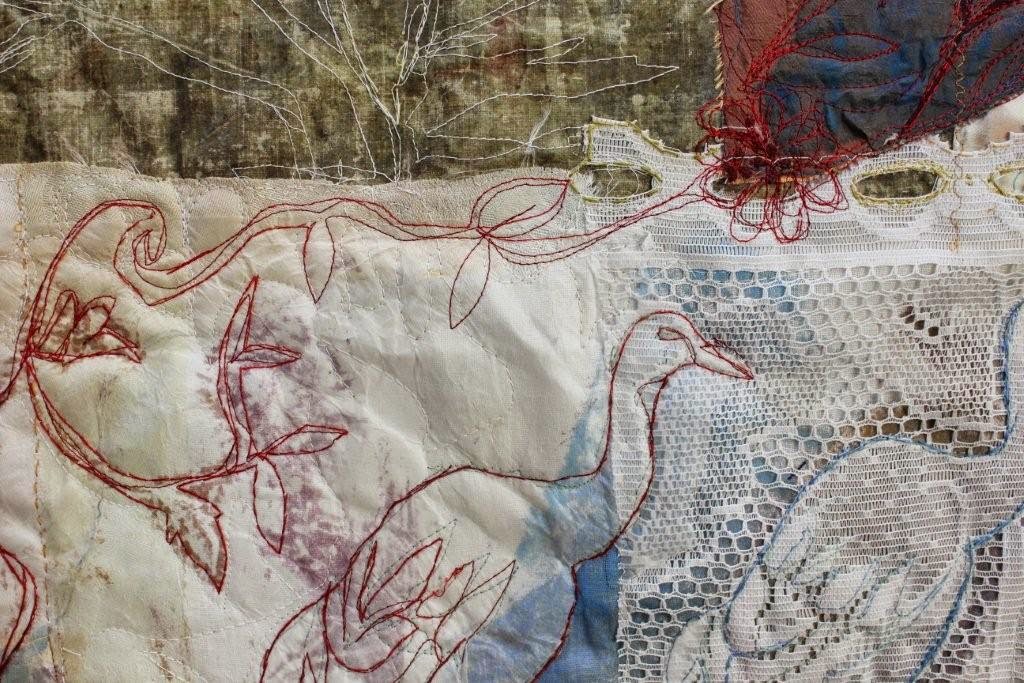 Finally, serendipity sometimes plays a part. As I was writing this, I was working in Wales on a one day workshop with Itchy Fingers textile group. The focus being either Dylan Thomas or Serendipity.(Images permission of the group) 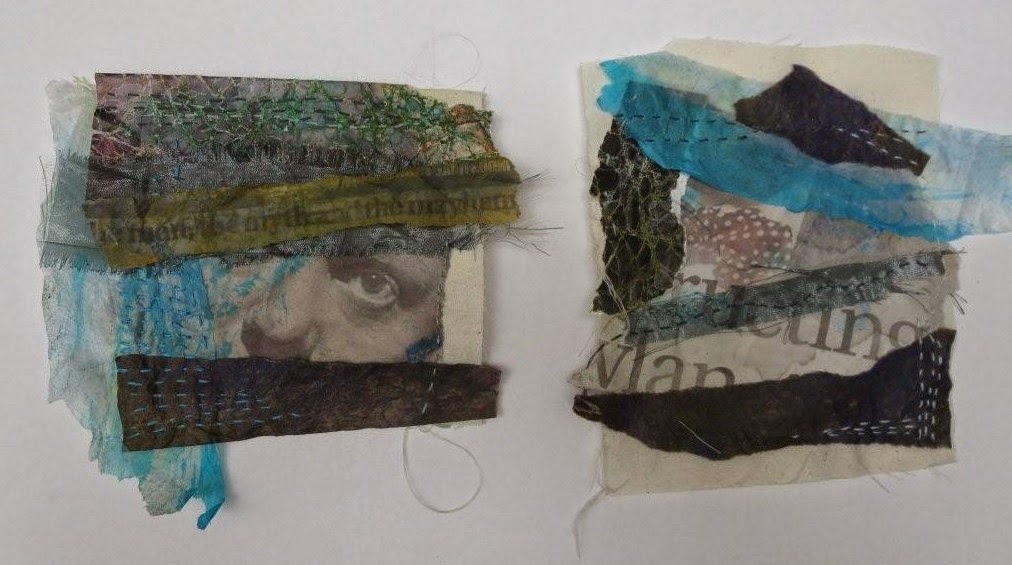 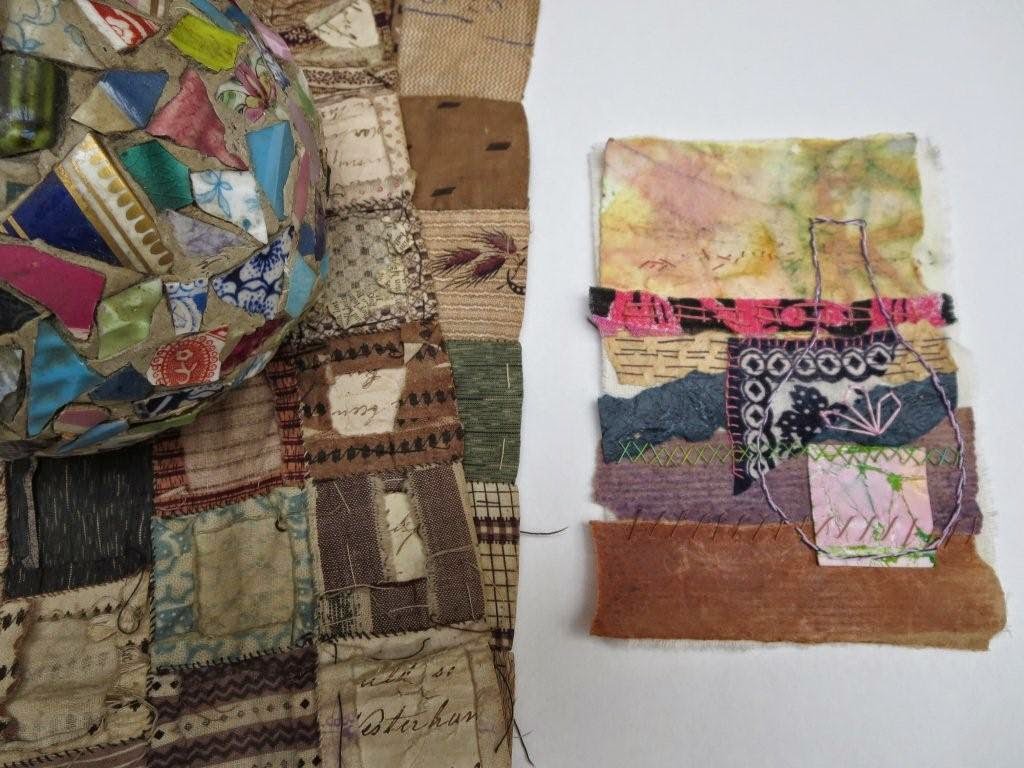 Looking at the back of patchwork and a jug.(Enid) 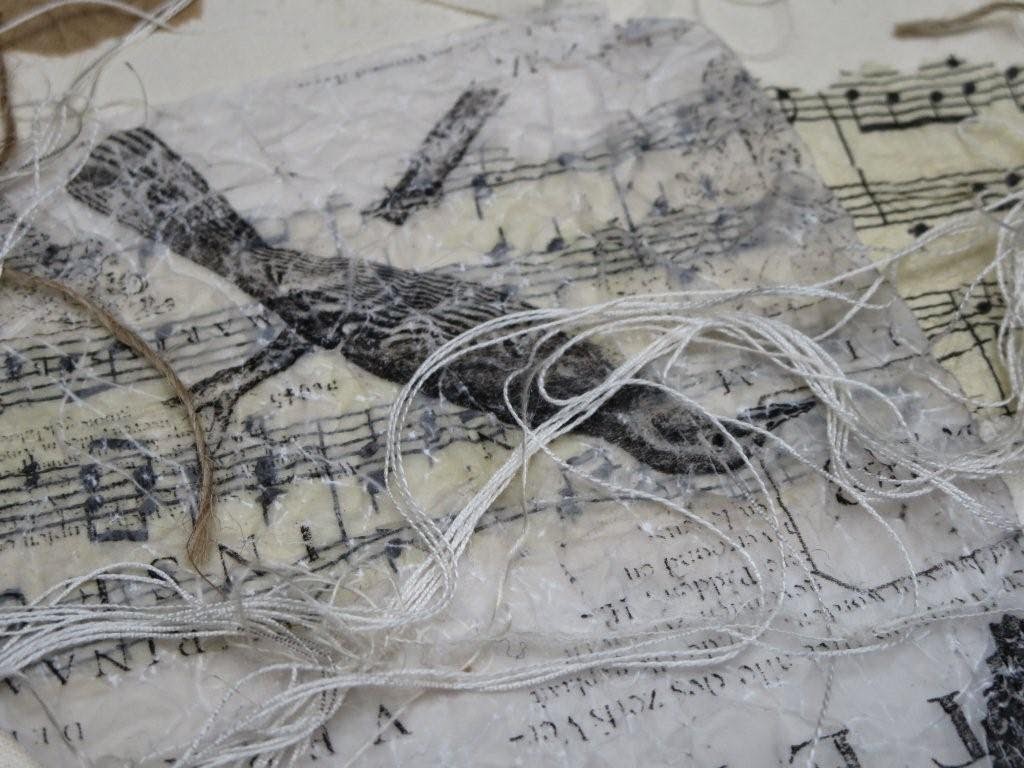 And not forgetting poetry and music, the stuff of life.
Though I am more of Sylvia Plath Fan: from her poem Blackberrying:
Overhead go the choughs in black, cacophonous flocks—

Bits of burnt paper wheeling in a blown sky.
Theirs is the only voice, protesting, protesting.

Inside out, back to front, back to the beginning.'Art is not real? it is a representation.' and equally,  the artist's studio...the world is out there. see my Extreme Stitching article. on Textileartist.

Hempel's ravens (the confirmation paradox)
While taking a group of benefactors on a tour through the new aviary they had just helped to build, a noted ornithologist commented, "And here we have two of the finest examples of ravens that I have ever seen. Notice the lustrous black plumage for which all ravens are famous." The ornithologist continued his lecture, commenting on the corvine feeding and nesting habits as well as on the birds' legendary role as harbingers of ill fortune.
When the ornithologist had finished, a young man said, "Sir, excuse me, but did you say that 'All ravens are black'?"
"I don't know if I said exactly that, but it's true. All ravens are black."
"But, how do you know that - for certain, I mean?" asked the young man.
"Well, I've seen a few hundred ravens in my day and every one of them has been black."
"Yes, but a few hundred are not all. How many ravens are there, anyway?"
"I would guess several million. As for your question, many other scientists, and non-scientists for that matter, have observed ravens over thousands of years and so far the birds have all been black. At least, I don't know of a single instance in which someone has produced a non-black raven."
"That's true, but it's still not all - just most."
"True, but there is other evidence. For example, take all these lovely multicolored birds we have seen today - the parrots, toucans, the peacocks -"
"They're lovely, but what do they have to do with your claim that all ravens are black?"
"Don't you see?" asked the ornithologist.
"No, I don't see. Please explain."
"Well, you accept the idea that every new instance of another black raven that is observed adds to the support of the generalization that all ravens are black?"
"Yes, of course."
"Well then, the statement 'All ravens are black' is logically equivalent to the statement 'All non-black things are non-ravens.' This being so and because whatever confirms a statement also confirms any logically equivalent statement, it's clear that any non-black non-raven supports the generalization 'All ravens are black.' Hence, all these colorful, non-black non-ravens also support the generalization."
"That's ridiculous," chided the young man. "In that case you might as well say that your blue jacket and gray pants also confirm the statement 'All ravens are black.' After all, they're also non-black non-ravens."
"That's correct," said the ornithologist. "Now you're beginning to think like a true scientist."
Who is reasoning correctly, the ornithologist or the young man?